How to configure Docker Swarm 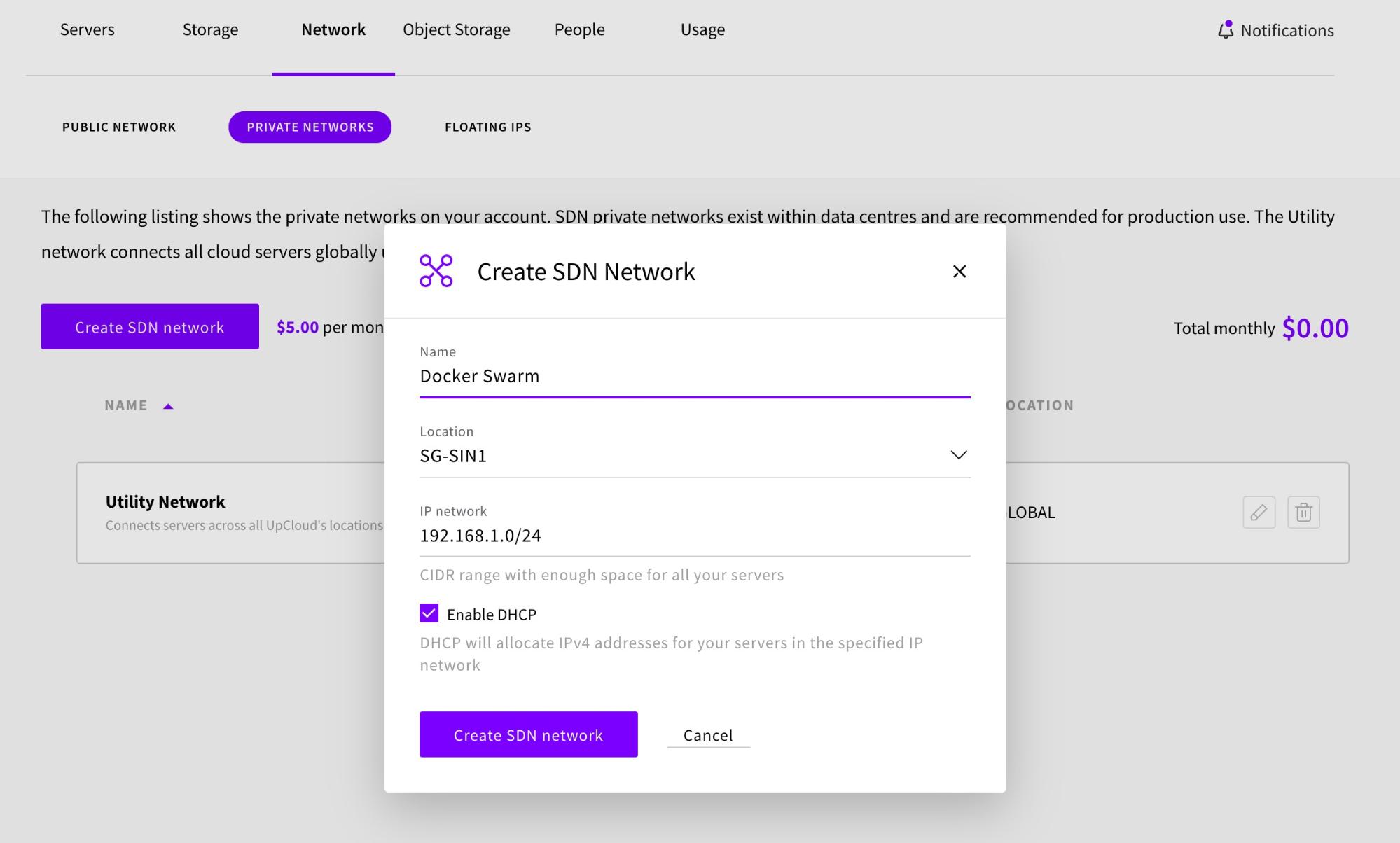 Distributing your web application over a cluster of cloud computing resources can significantly improve performance and availability. Docker Swarm is the Docker native clustering solution, which can turn a group of distributed Docker hosts into a single large virtual server.

Docker Swarm provides a standard Docker API and it can communicate with any tool that already works with Docker daemon allowing easy scaling to multiple hosts. With resources pooled in a Swarm cluster, your application can run as if it was installed on a high-performance cloud server while allowing easy scaling by adding or removing resources at the same time. This guide goes through the steps for setting up a simple Docker Swarm consisting of three servers – a primary manager and two worker nodes.

To start with, you are going to need to deploy some servers to run the Swarm. In this guide, the Swarm will consist of three servers; a primary manager and two worker nodes. However, a swarm can have as many nodes as required, and more can easily be added later.

When deploying the cloud servers for the Swarm, note that while Docker itself will work on most Linux distributions. CentOS and other Red Hat variants might require additional steps to allow the Swarm to communicate because of their stricter default firewall rules.

Log in to the UpCloud Control Panel and deploy three new servers for the Swarm cluster:

Once the new hosts are all up and running, perform the usual security preparations e.g. update the system, add users and SSH keys. You can find help with these steps at the guides for Managing Linux User Account Security and Using SSH-keys for Authentication.

Although not necessary, it is possible to have the Swarm contained within a private network.

Private networks allow you to create isolated environments within zones. You can then define custom local networks with the IP ranges of your choosing and attach IPs statically or automatically using DHCP. See our guide for detailed information on how to create a private network.

For this guide we’ll be using a private network with the following private IP addresses:

We’ll start by creating a new private network from the Private Network section under the Network menu. Click the Create SDN Network button to confirm. Then choose a name for the network, select a location, and specify an IP network as shown below:

To add a server to the newly created network, first shut down the server and then navigate to the server’s Network tab. Next, click the Attach SDN private network button as shown below: 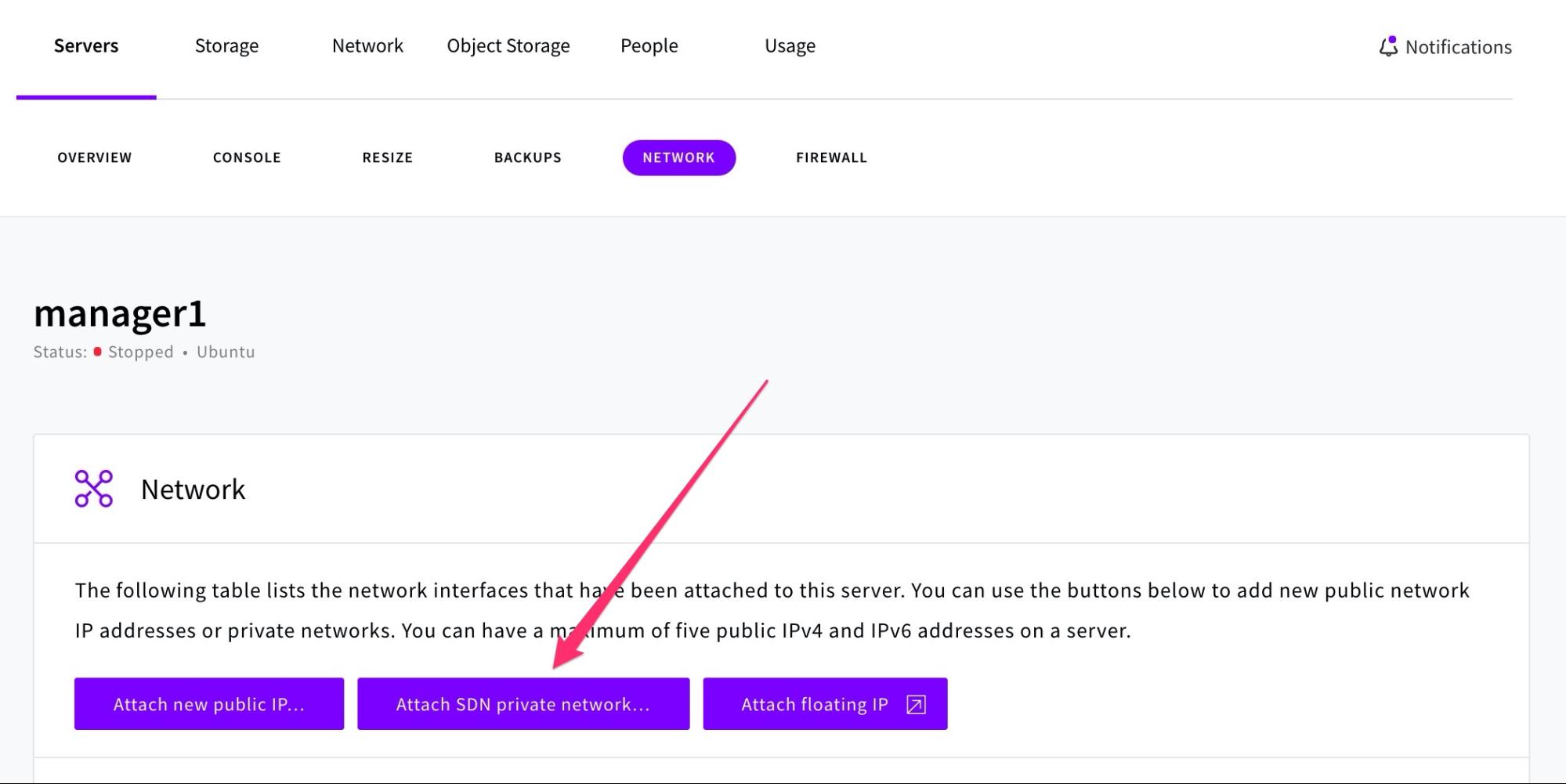 Select the SDN network that you created earlier and specify the private IP address that you would like to use for the server: 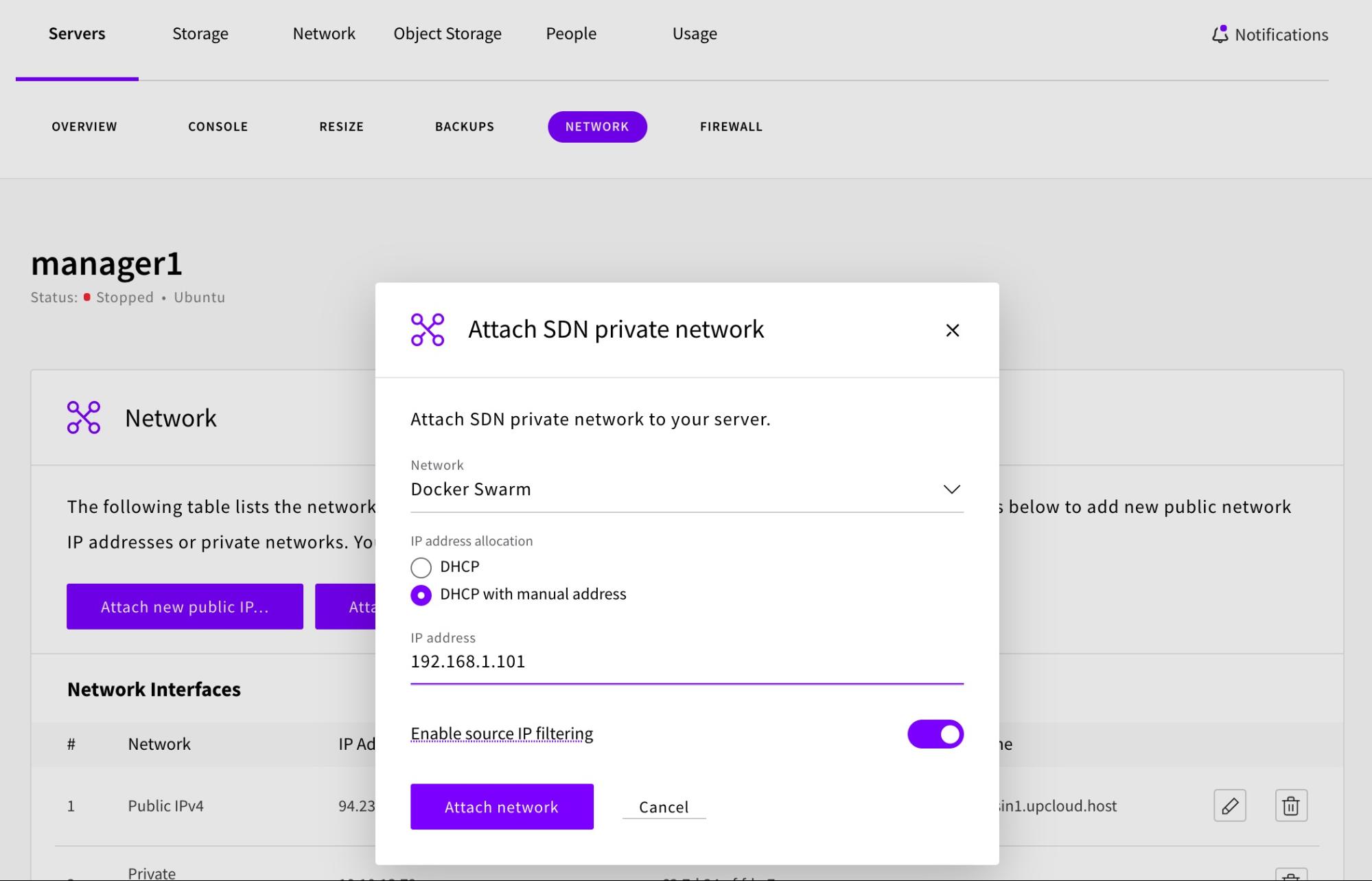 After attaching the server to the private network, you need to also configure a new network interface at your operating system level. Check the guide on how to add new IP addresses for instructions on how to do this.

Add the remaining servers to the private network by repeating the same steps from above.

Install Docker Engine on each node

With the initial configurations done and a new private network configured, we are now ready to install Docker Engine on each of the servers. You’ll find instructions for Ubuntu and CentOS below. The setup instructions for other operating systems can be found on the docker website.

Install packages to allow apt to use a repository over HTTPS:

You can refer to the official Docker documentation for more information about installing Docker on Ubuntu.

We are now ready to create the Swarm. SSH into the cloud server where you want to run your manager node and run the command below. Be sure to replace with the IP address of your manager server. In this tutorial, all our servers are part of an SDN private network and the private IP address for the manager node is 192.168.1.101.

If you are not using a private network replace with the public IP address of your server:

Take note of the join command to add workers to the swarm as we will be using this later in the tutorial when adding our worker nodes.

To confirm that the manager node has created the new Swarm successfully, you can run the following command to view information about the Swarm:

The * next to the node ID indicates that you are currently connected on this node.

Add worker nodes to the Swarm

Now that the Swarm has been created, we can start attaching worker nodes to it. To do this, SSH into the server where you want to run a worker node and run the join command that was produced by the docker swarm init output in the previous section.

If you don’t have the command available, you can SSH back into the manager node and run the following command to retrieve the join command for a worker:

After running the join command, you will see a message indicating that the worker node has been successfully added to the swarm.

Repeat this step for the second worker node to add that to the Swarm as well.

You should now have a total of three nodes in the Swarm. To confirm this, SSH back into the server where the manager node is running and enter the following command to see a list of all the nodes in the swarm:

You now have a fully functioning Swarm consisting of a manager node and two worker nodes.

Deploy a service to the Swarm

You can now start deploying services to the newly created swarm. For the remainder of this guide, we will be working with an example service called helloworld. To get started, SSH into the server where your manager node is and run the following command:

This creates a single container instance of the service called helloworld which then executes ping call to google.com.

You can see the running services with the following command:

With the service now deployed to the swarm, you can begin scaling the number of containers in the service. The containers running in services are called “tasks.”

To scale the number of tasks in the service to 5 for example, enter the following command:

This creates 4 new tasks bringing the total number in the swarm to 5. The tasks are all distributed between the three nodes of the swarm.

Run the command below to see the updated task list:

You can get more details about the service by inspecting it with the command below:

Running the scale command again with a smaller number will reduce the number of tasks.

Finally, to remove the running service run the following command:

Run the command below to verify that the swarm manager has indeed removed the service. You should get back a message saying that the service could not be found:

Docker Swarm is an easy way to get started with computer clusters. It provides high availability regardless of the size of your deployment. Docker boasts results of up to a thousand nodes and fifty thousand containers with no performance degradation. Scaling your cluster is also convenient with the fast deployment of new hosts through your UpCloud Control Panel or the UpCloud API.

Now that you have a basic Swarm cluster set up, head over to the Docker documentation pages to learn more about swarm mode.