How to import VMware images 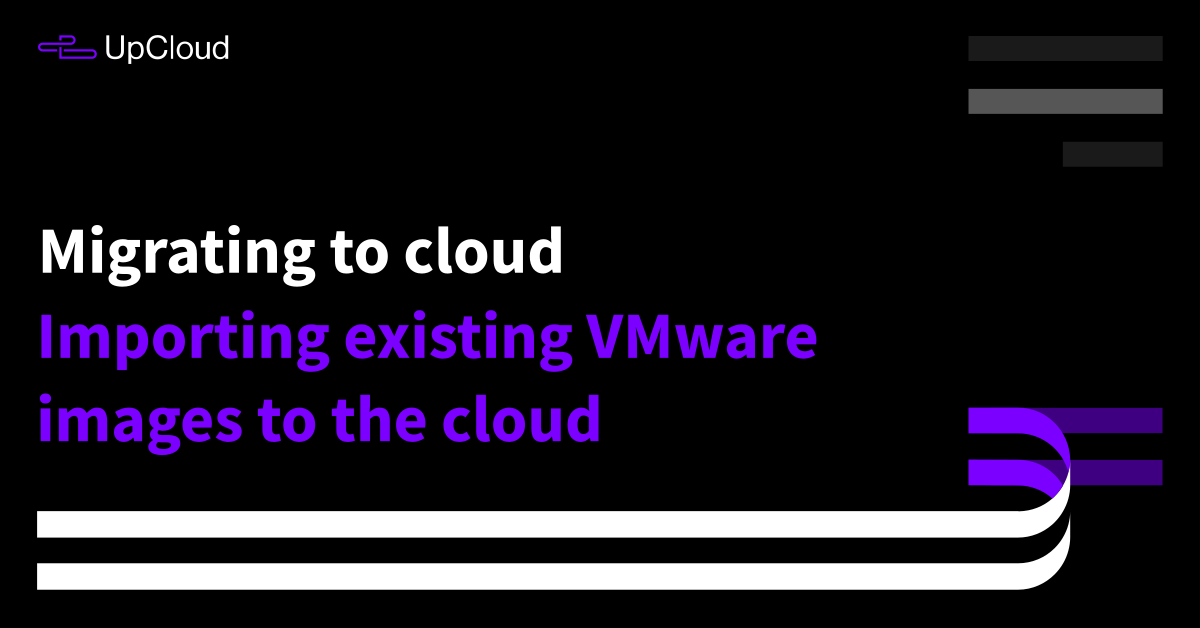 If you already have a running virtual Linux host on a VMware hypervisor, but would like to take advantage of the scalable hardware and MaxIOPS storage technology, it is possible to import VMware systems to UpCloud. To get your existing server running in the cloud you will need to upload the server image to a new cloud host, convert it to the RAW format, copy the converted image to a new storage drive, and reconfigure the host. This migration guide goes through each step in detail to help you transfer pre-existing virtual servers to the cloud.

Please note that only Linux based virtual hosts can be imported. Windows Servers need to be deployed using the templates provided by UpCloud due to licensing.

To start off, log in to your UpCloud Control Panel and deploy a new server. You can choose whichever flavour of Linux you prefer, but for convenience, you could use the same distro as the system image you are migrating.

The new server will be used to download, convert and set up the image being imported. Consider the following when making the configurations:

Once the configurations are done, hit the Deploy server button. Wait a few seconds for the server to start, then log into the newly deployed host to continue.

Update the system to make sure the software is running the latest versions.

Here the vda disk with a partition called vda1 is your primary storage and the vdb disk is the second device without partitions. If everything seems in order, continue with uploading to import the VMware system image to your cloud server.

Depending on your VMware hypervisor configuration the system storage disk might be stored in one or more files. The VMware virtual disk files are usually named the same as your virtual system and have a .vmdk file extension. You will need to copy the .vmdk files to the new cloud host, for example, using Secure Copy, SFTP or rsync.

You can find out about some of the different secure file transfer options in the first section Encrypt communications in the article for how to secure your Linux cloud server. Depending on your VMware system and your network connection it may be useful to compress the disk files for the transfer and then uncompress them again on the target host.

Once you have finished uploading the system image files, you will need to convert them from a VMware image to the RAW format. The file format can be converted using the qemu-img utility available through the package managers on most Linux distributions. With Ubuntu and other Debian-based systems, it is included in the qemu-utils package while on CentOS it can be installed by itself.

With the required utilities installed, convert the VMware image to RAW format with the command below. Replace VMware_image with the name of your VMware virtual disk file and the RAW_image with what you wish to call the new image file.

Once the conversion is complete, copy the new RAW image content to the secondary disk. Replace the RAW_image with the converted disk file name just as above.

Afterwards, you can shut down the server and remove the old primary disk. Go to your UpCloud control panel and the Storage tab in your server settings. Once the server is in the stopped state, click the eject icon on the primary storage device to remove it. The second disk, where you just transferred the system image, will then be automatically set as the new primary device. In the same menu, you should also choose the disk controller.

The newly transferred operating system should now work with the cloud server. However, depending on your old network setting you may need to use the Web Console log into the server and fix any issues before the system will connect normally. Go to your UpCloud control panel, open the Console tab under your server settings, and click Open the console connection.

Now, log in with the credentials for the imported VMware host as you did before transferring the server to the cloud. Once in, check the network settings with the following command.

UpCloud hosts have three network interfaces in the default configuration, public IPv4, private IPv4 and public IPv6 addresses, you might see something similar to the example output below. Here the first interface eth0 is working but the other devices are not yet configured.

Add the following sections to the file. If the network interfaces on your server are named differently, use those names instead of eth0, eth1, etc.

Congratulations, your imported VMware system should now be up and running on a brand new cloud host. In case you have any further problems with the network, you can find additional help with troubleshooting the connectivity at the guide about network issues with Linux host.

Also, if you run into issues with booting from the migrated system image, you can always attach the old primary disk again and find the uploaded VMware disk stored safely for another try without the need to wait for the image to upload again. Once you are confident that the imported system is running properly, you can go to the Storage menu in your UpCloud Control Panel and delete the unnecessary storage device.