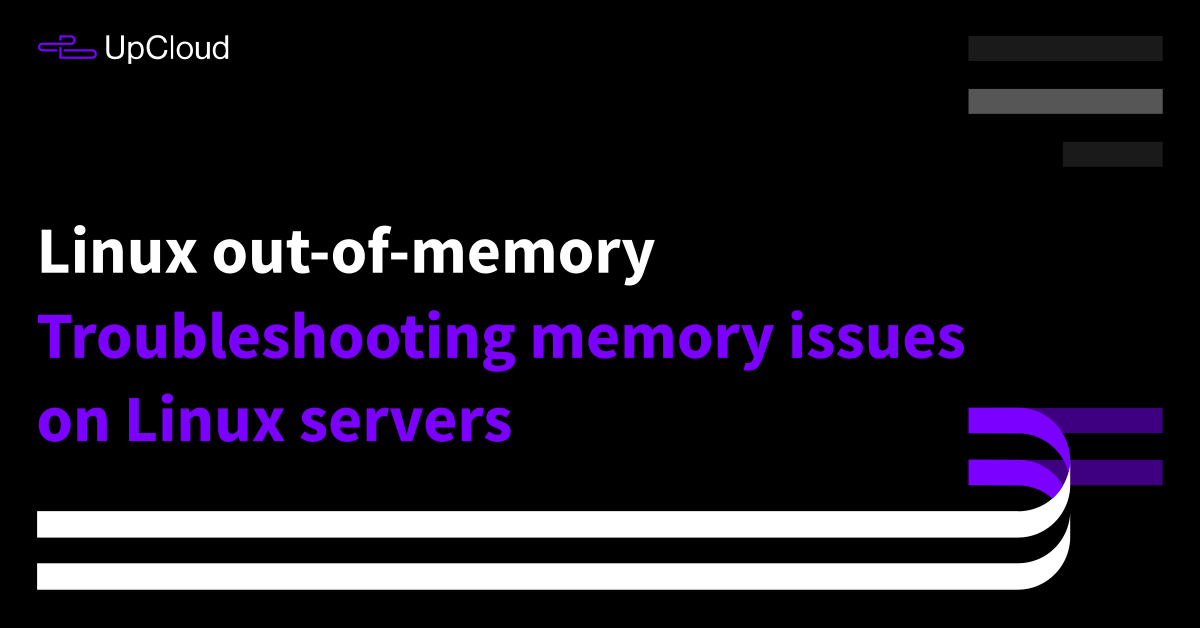 Some unexpected behaviour on the server side may at times be caused by system resource limitations. Linux by its design aims to use all of the available physical memory as efficiently as possible, in practice, the Linux kernel follows a basic rule that a page of free RAM is wasted RAM. The system holds a lot more in RAM than just application data, most importantly mirrored data from storage drives for faster access. This debugging guide aims to explain how to identify how much of the resources are actually being used, and how to recognise real resource outage issues.

Suddenly killed tasks are often the result of the system running out of memory, which is when the so-called Out-of-memory (OOM) killer steps in. If a task gets killed to save memory, it gets logged into various log files stored at /var/log/

You can search the logs for messages of out of memory alerts.

Grep goes through all logs under the directory and therefore will show at least the just ran command itself from the /var/log/auth.log. Actual log marks of OOM killed processes would look something like the following.

The log note here shows the process killed was mysqld with pid 9163 and OOM score of 511 at the time it was killed. Your log messages may vary depending on Linux distribution and system configuration.

If for example a process crucial to your web application was killed as a result of out of memory situation, you have a couple of options, reduce the amount of memory asked by the process, disallow processes to overcommit memory, or simply add more memory to your server configuration.

Linux comes with a few handy tools for tracking processes that can help with identifying possible resource outages. You can track memory usage for example with the command below.

The command prints out current memory statistics, for example in 1 GB system the output is something along the lines of the example underneath.

Here it is important to make the distinction between application used memory, buffers and caches. On the Mem line of the output it would appear nearly 75% of our RAM is in use, but then again over half of the used memory is occupied by cached data.

The difference is that while applications reserve memory for their own use, the cache is simply commonly used hard drive data that the kernel stores temporarily in RAM space for faster access, which on the application level is considered free memory.

Keeping that in mind, it’s easier to understand why used and free memory are listed twice, on the second line is conveniently calculated the actual memory usage when taken into account the amount of memory occupied by buffers and cache.

In this example, the system is using merely 234MB of the total available 993MB, and no process is an immediate danger of being killed to save resources.

Another useful tool for memory monitoring is ‘top’, which displays useful continuously updated information about processes’ memory and CPU usage, runtime and other statistics. This is particularly useful for identifying resource exhaustive tasks.

You can scroll the list using Page Up and Page Down buttons on your keyboard. The program runs on the foreground until cancelled by pressing ‘q’ to quit. The resource usage is shown in percentages and gives an easy overview of your system’s workload.

In the example output shown above, the system is idle and the memory usage is nominal.

Check if your process is at risk

If your server’s memory gets used up to the extent at which it can threaten system stability, the Out-of-memory killer will choose which process to eliminate based on many variables such as the amount of work done that would be lost and total memory freed. Linux keeps a score for each running process, which represents the likelihood at which the process would be killed in OOM situation.

This score is stored on file in /proc/<pid>/oom_score, where pid is the identification number for the process you are looking into. The pid can be easily found using the following command.

The output of the command when searching for mysql, for example, would be similar to the example below.

Here the process ID is the first number on the row, 5872 in this case, which then can be used to get further information on this particular task.

The readout of this gives us a single numerical value for the chance of the process getting axed by the OOM killer. The higher the number the more likely the task is to be chosen if an out of memory situation should arise.

If your important process has a very high OOM score, it is possible the process is wasting memory and should be looked into. However just high OOM score, if the memory usage otherwise remains nominal, is no reason for concern. OOM killer can be disabled, but this is not recommended as it might cause unhandled exceptions in out of memory situations, possibly leading to a kernel panic or even a system halt.

In major Linux distributions, the kernel allows by default for processes to request more memory than is currently free in the system to improve the memory utilization. This is based on heuristics that the processes never truly use all the memory they request. However, if your system is at risk of running out of memory, and you wish to prevent losing tasks to OOM killer, it is possible to disallow memory overcommit.

To change how the system handles overcommit calls Linux has an application called ‘sysctl’ that is used to modify kernel parameters at runtime. You can list all sysctl controlled parameters using the following.

The particular parameters that control memory are very imaginatively named vm.overcommit_memory and vm.overcommit_ratio. To change the overcommit mode, use the below command.

This parameter has 3 different values:

The important part of changing the overcommit mode is to remember to also change the overcommit_ratio. When overcommit_memory is set to 2, the committed address space is not permitted to exceed swap space plus this percentage of physical RAM. To be able to use all of the system’s memory use the next command.

These changes are applied immediately but will only persist until the next system reboot. To have the changes remain permanent, the same parameter values need to be added to sysctl.conf –file. Open the configuration file for edit.

Add the same lines to the end of the file.

Save the changes (ctrl + O) and exit (ctrl + X) the editor. Your server will read the configurations every time at boot up, and prevent applications from overcommitting memory.

Add more memory to your server

The safest and most futureproof option for solving out of memory issues is adding more memory to your system. In a traditional server environment you would need to order new memory modules, wait for them to arrive, and install them to your system, but with cloud servers, all you have to do is increase the amount of RAM you wish to have available at your UpCloud control panel.

Log in to your UpCloud control panel, browse to the Server Listing and open your server’s details by clicking on its description. In the Server General Settings tab, there is a section on the right name CPU and Memory Settings. While your server is running, you will notice that these options are greyed out, this is because they may only be safely changed while the server is shut down.

Proceed by turning off your server with the Shutdown request option on the left of the same page, and click OK in the confirmation dialogue. It will usually take a moment for the server to shut down completely, but once it has the CPU and Memory Settings will become available without you having to refresh the page.

Now you will have two options to increase the amount of RAM in your system:

The slider allows you to select a value in increments of 1GB to change the RAM to the desired configuration. Changing your server’s configuration also affect the pricing of your server. To see the corresponding prices to each preconfigured option or custom configuration, check the server configuration options at new server deployment.

Once you’ve selected the new server configuration, simply press the Update button on the right and the changes will be made immediately. Then you can start your server again with the increased RAM.

If you selected a larger preconfigured option, refer to our resizing storage guide on how to allocate the newly added disk space.