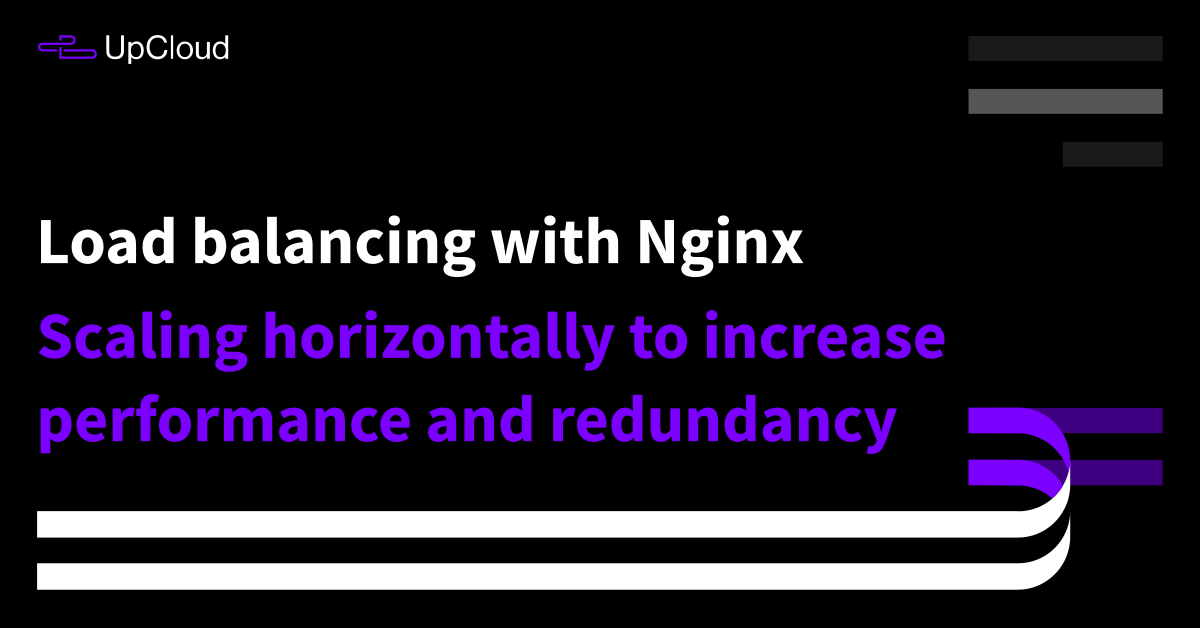 Load balancing is an excellent way to scale out your application and increase its performance and redundancy. Nginx, a popular web server software, can be configured as a simple yet powerful load balancer to improve your servers resource availability and efficiency.

How does Nginx work? Nginx acts as a single entry point to a distributed web application working on multiple separate servers.

As a prerequisite, you’ll need to have at least two hosts with a web server software installed and configured to see the benefit of the load balancer. If you already have one web host set up, duplicate it by creating a custom image and deploy it onto a new server at your UpCloud control panel.

The first thing to do is to set up a new host that will serve as your load balancer. Deploy a new instance at your UpCloud Control Panel if you haven’t already. Currently, nginx packages are available on the latest versions of CentOS, Debian and Ubuntu. So pick whichever of these you prefer.

After you have set up the server the way you like, install the latest stable nginx. Use one of the following methods.

Once installed change directory into the nginx main configuration folder.

Now depending on your OS, the web server configuration files will be in one of two places.

CentOS users can find their host configuration files under /etc/nginx/conf.d/ in which any .conf type virtual host file gets loaded.

Check that you find at least the default configuration and then restart nginx.

Test that the server replies to HTTP requests. Open the load balancer server’s public IP address in your web browser. When you see the default welcoming page for nginx the installation was successful.

If you have trouble loading the page, check that a firewall is not blocking your connection. For example on CentOS 7 the default firewall rules do not allow HTTP traffic, enable it with the commands below.

Then try reloading your browser.

Configuring nginx as a load balancer

When nginx is installed and tested, start to configure it for load balancing. In essence, all you need to do is set up nginx with instructions for which type of connections to listen to and where to redirect them. Create a new configuration file using whichever text editor you prefer. For example with nano:

In the load-balancer.conf you’ll need to define the following two segments, upstream and server, see the examples below.

Then save the file and exit the editor.

Next, disable the default server configuration you earlier tested was working after the installation. Again depending on your OS, this part differs slightly.

On Debian and Ubuntu systems you’ll need to remove the default symbolic link from the sites-enabled folder.

CentOS hosts don’t use the same linking. Instead, simply rename the default.conf in the conf.d/ directory to something that doesn’t end with .conf, for example:

Then use the following to restart nginx.

Check that nginx starts successfully. If the restart fails, take a look at the  /etc/nginx/conf.d/load-balancer.conf you just created to make sure there are no mistypes or missing semicolons.

When you enter the load balancer’s public IP address in your web browser, you should pass to one of your back-end servers.

Load balancing with nginx uses a round-robin algorithm by default if no other method is defined, like in the first example above. With round-robin scheme each server is selected in turns according to the order you set them in the load-balancer.conf file. This balances the number of requests equally for short operations.

Least connections based load balancing is another straightforward method. As the name suggests, this method directs the requests to the server with the least active connections at that time. It works more fairly than round-robin would with applications where requests might sometimes take longer to complete.

To enable least connections balancing method, add the parameter least_conn to your upstream section as shown in the example below.

Round-robin and least connections balancing schemes are fair and have their uses. However, they cannot provide session persistence. If your web application requires that the users are subsequently directed to the same back-end server as during their previous connection, use IP hashing method instead. IP hashing uses the visitors IP address as a key to determine which host should be selected to service the request. This allows the visitors to be each time directed to the same server, granted that the server is available and the visitor’s IP address hasn’t changed.

To use this method, add the ip_hash -parameter to your upstream segment like in the example underneath.

In a server setup where the available resources between different hosts are not equal, it might be desirable to favour some servers over others. Defining server weights allows you to further fine-tune load balancing with nginx. The server with the highest weight in the load balancer is selected the most often.

For example in the configuration shown above the first server is selected twice as often as the second, which again gets twice the requests compared to the third.

Enable HTTPS for your site, it is a great way to protect your visitors and their data. If you haven’t yet implemented encryption on your web hosts, we highly recommend you take a look at our guide for how to install Let’s Encrypt on nginx.

To use encryption with a load balancer is easier than you might think. All you need to do is to add another server section to your load balancer configuration file which listens to HTTPS traffic at port 443 with SSL.  Then set up a proxy_pass to your upstream segment like with the HTTP in the previous example above.

Then add the following server segment to the end of the file.

Then save the file, exit the editor and restart nginx again.

Setting up encryption at your load balancer when you are using the private network connections to your back-end has some great advantages.

With the HTTPS-enabled you also have the option to enforce encryption to all connections to your load balancer. Simply update your server segment listening to port 80 with a server name and a redirection to your HTTPS port. Then remove or comment out the location portion as it’s no longer needed. See the example below.

Save the file again after you have made the changes. Then restart nginx.

Now all connections to your load balancer will be served over an encrypted HTTPS connection. Requests to the unencrypted HTTP will be redirected to use HTTPS as well. This provides a seamless transition into encryption. Nothing is required from your visitors.

In order to know which servers are available, nginx’s implementations of reverse proxy includes passive server health checks. If a server fails to respond to a request or replies with an error, nginx will note the server has failed. It will try to avoid forwarding connections to that server for a time.

The number of consecutive unsuccessful connection attempts within a certain time period can be defined in the load balancer configuration file. Set a parameter max_fails to the server lines. By default, when no max_fails is specified, this value is set to 1. Optionally setting the max_fails to 0 will disable health checks to that server.

If max_fails is set to a value greater than 1 the subsequent fails must happen within a specific time frame for the fails to count. This time frame is specified by a parameter fail_timeout, which also defines how long the server should be considered failed. By default, the fail_timeout is set to 10 seconds.

After a server is marked failed and the time set by fail_timeout has passed, nginx will begin to gracefully probe the server with client requests. If the probes return successful, the server is again marked live and included in the load balancing as normal.

Use the health checks. They allow you to adapt your server back-end to the current demand by powering up or down hosts as required. When you start up additional servers during high traffic, it can easily increase your application performance when new resources become automatically available to your load balancer.

Conclusions on the advantages of load balancing

If you wish to improve your web application performance and availability, a load balancer is definitely something to consider. Nginx is powerful yet relatively simple to set up to load balance web server. Together with an easy encryption solution, such as Let’s Encrypt client, it makes for a great front-end to your web farm. Check out the documentation for upstream over at nginx.org to learn more.

When you are using multiple hosts protects your web service with redundancy, the load balancer itself can still leave a single point of failure. You can further improve high availability when you set up a floating IP between multiple load balancers. Find out more in our article on floating IPs on UpCloud.