Before the month is over, we want to highlight some of the recent cloud service upgrades we have published. Many of these upgrades and features are a direct result of the feedback you have given us. Please keep the feedback coming in the future as well and thank you for helping us build a better service for everyone.

The recent improvements to the service are:

Previously, all servers on UpCloud were able to access the public network with port speeds of 100 Mbps. With this upgrade, all servers enjoy new faster speeds without extra costs.

We have added a new option to the Server Settings -page to manage network adapter and display adapter configurations more easily. If the operating system you use includes driver support for VirtIO -network adapters and currently the server uses Intel E1000 -emulated network adapter, changing the network adapter will lower latency dramatically and the full potential of the port speeds is achievable.

The display adapter setting can be used to set the most optimal configuration for each operating system. This setting is especially useful with Microsoft Windows when customers want to use large screen resolutions.

We have improved the firewall settings page based on feedback from our customers. The new firewall tool is easier to use than before and customers can choose from a set of preconfigured profiles that include the most common configurations for different use cases. In addition, customers can now copy firewall settings from other servers in the same account.

4. Cloning of backups to regular disks

Many customers have wished for better manageability of backups. Now customers can easily clone backups into regular disks that can then be attached to servers. Furthermore, if customers clone to a MaxIOPS disk, backups can even be converted to templates with just a few clicks regardless of the type of disk you currently utilise in your production server. Templates can then be used to clone new servers with ease and without shutting down the server in production use.

5. Improvement to the API to help build more redundant environments

Even though virtualisation has brought added benefits to redundancy, there is value in making sure critical master-slave type production environments do not end up on the same host machine. The new addition to our API enables customers to see which host machine the server is on and then use another attribute during server start or creation to make sure the server does not use the same host machine as its redundant pair. The new host-attribute responds with the ID of the host machine the server is on and then avoid_host-attribute can be used to make sure the VM does not start on a specific host with its redundant pair, for example. More on this in the updated API documentation: https://upcloud.com/
documentation/api/

That’s all for now. Once again, thank you for all the feedback. It really does help us build a better service for everyone!
Photo: Project 365 #47: 160215 Ice On Fire by Pete 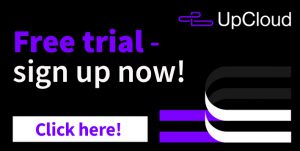