Tutorials How to transfer files to Linux server using Samba

How to transfer files to Linux server using Samba

Once you have your first Linux server up and running, you might be wondering how to transfer files or folders between your server and your local computer. Luckily, there’s an easy solution by setting up a Samba file service on your Cloud Server.

Samba is a suite of Unix applications that speak the Server Message Block (SMB) protocol. Microsoft Windows operating systems and the OS/2 operating system use SMB to perform client-server networking for file and printer sharing and associated operations.

In short, Samba helps you transfer files between your server and your local computer. In this tutorial, we’ll show the steps to set up and configure your Cloud Server with Samba.

Setting up your server

To begin, you need a Linux based Cloud Server, this can be Ubuntu, Debian or Centos. You can find out more in our tutorial on how to create a new Cloud Server.

When your server is live, log in using SSH and continue by updating the server software.

Then install Samba with the following command.

We can check if the installation was successful by looking up the install location.

With Samba installed, we will next configure the firewall.

Depending on your Linux distribution, you will have either ufw or firewalld. If you are running Ubuntu or Debian, UFW is the firewall of choice. CentOS on the other hand comes with firewalld.

You should also allow SSH to prevent yourself from getting locked out.

Next, enable the firewall and the configured rules.

Now let’s verify that the firewall is enabled as well as that Samba and SSH are allowed.

The output should show something like the example below.

Now let’s start configuring Samba. However, before you start, you should always make a backup of the configuration file. This way you always have a way to restore the default settings if something goes wrong.

Open the Samba configuration file with a text editor, for example using nano with the following command.

Then find the server role setting in the configuration file. The default value should be set to “standalone server”.

Now let’s test our configuration file with the command below.

If there are no errors, your output should show the configuration as well as say “Loaded services file ok” like the example above.

Now that Samba is installed, we need to create a directory for it to share, this makes it more organised.

The command above creates a new folder called samba in the system root which we will share later.

Now let’s set the group ownership of the shared directory to the sambashare group which was created during the Samba installation.

Samba utilises both Linux users and group permission as well as its own mechanism.

Let’s create a user account using the useradd command. You can replace the example username upcloud with what you prefer.

Breaking down the above command you just entered.

Now create a home directory for our user upcloud, then set the group of the folder to the samba share.

You will be prompted to enter and confirm the user password.

Once the password is set and the user is created, enable the user with the following.

Lastly, we need to tell Samba where the shared directory is and who has the permissions to it.

Add the following lines to the end of the file.

When done, save the file and exit the editor.

Then restart the Samba services

Once this is done, you are ready to connect to the Samba directory from your local machine.

For Windows users, you can connect to the samba directory via the Windows explorer.

1. Click on start and search for “File Explorer” then open it

2. In the window, right-click on “This PC” then select “Map network drive” 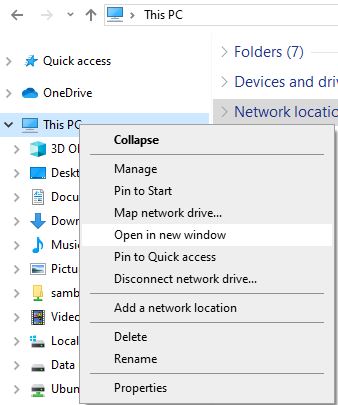 3. A Popup will show asking for the credentials, Insert the user credentials, set in the smbpasswd portion in Setting up User Accounts. For this eg, it will be “upcloud” 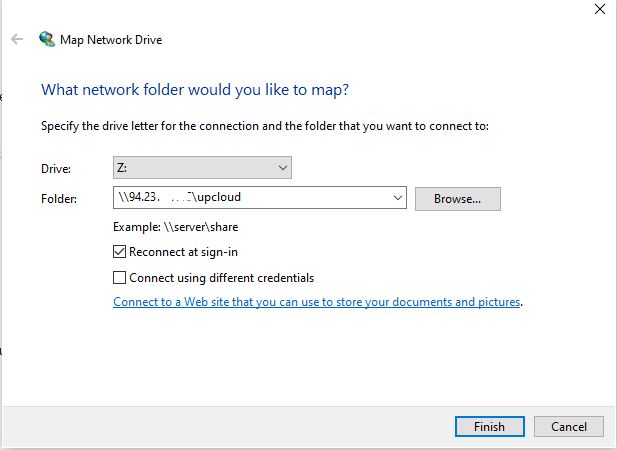 4. The folder is now connected. I have added a file to the folder and the file is shown in my windows network drive.

In macOS you can access the Samba Shares either from the command line or using the default macOS file manager Finder. The following steps show how to access the share using Finder. 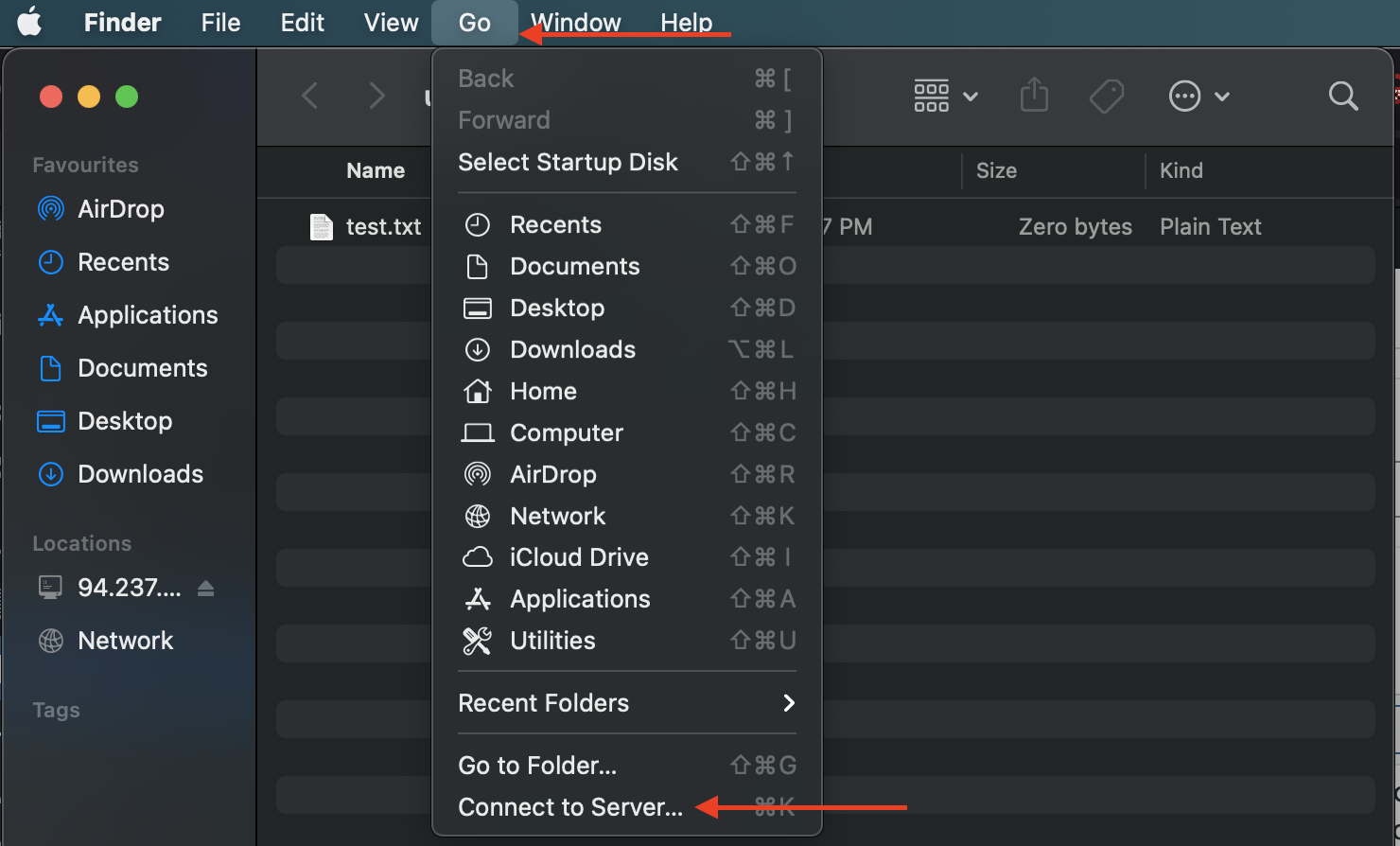 2. In “Connect To”, enter the address of the Samba share in the following format smb://samba_hostname_or_server_ip/sharename.

3. Make sure you select registered user and key in your Linux Credentials. In this eg, that will be upcloud 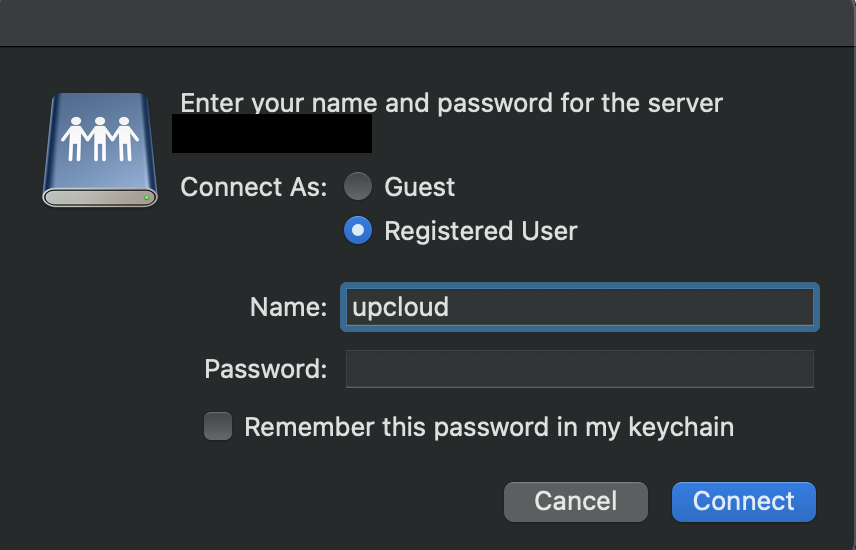 4. Once it is connected you will be able to see the files from the server.

On most Linux distributions, you can use a Samba command-line client. For example, smbclient can be installed on Ubuntu and other Debian based systems using the following command.
sudo apt install smbclient
Once installed, you can connect to your Samba share with the command below.
smbclient //samba_hostname_or_server_ip/sharename -U username
For example, using the Cloud Server IP address and the “upcloud” share we created earlier. You’ll also need to use the -U parameter for specifying the login username.
smbclient //94.237.60.118/upcloud -U upcloud
When prompted, enter your password
Enter WORKGROUP\upcloud's password:
Try "help" to get a list of possible commands.
smb: \>
Alternatively, you can add your Samba share to most native file managers.

1. For example, on Ubuntu Nautilus, click the “+Other Locations” on the left panel. Then enter your Samba server address and share name in the “Connect to Server” field and click the Connect button. 2. In the authentication window, select to use Registered User and enter your username and password.

You can also choose to have the username and password remembered either for the duration of the current login or permanently. 3. You are then ready to start uploading files to your Samba Linux server. You should now be able to transfer files from your local computer to your Cloud Server and back.

There are of course many other options for configuring your Samba file server. You can read up more on these at the SambaWiki.