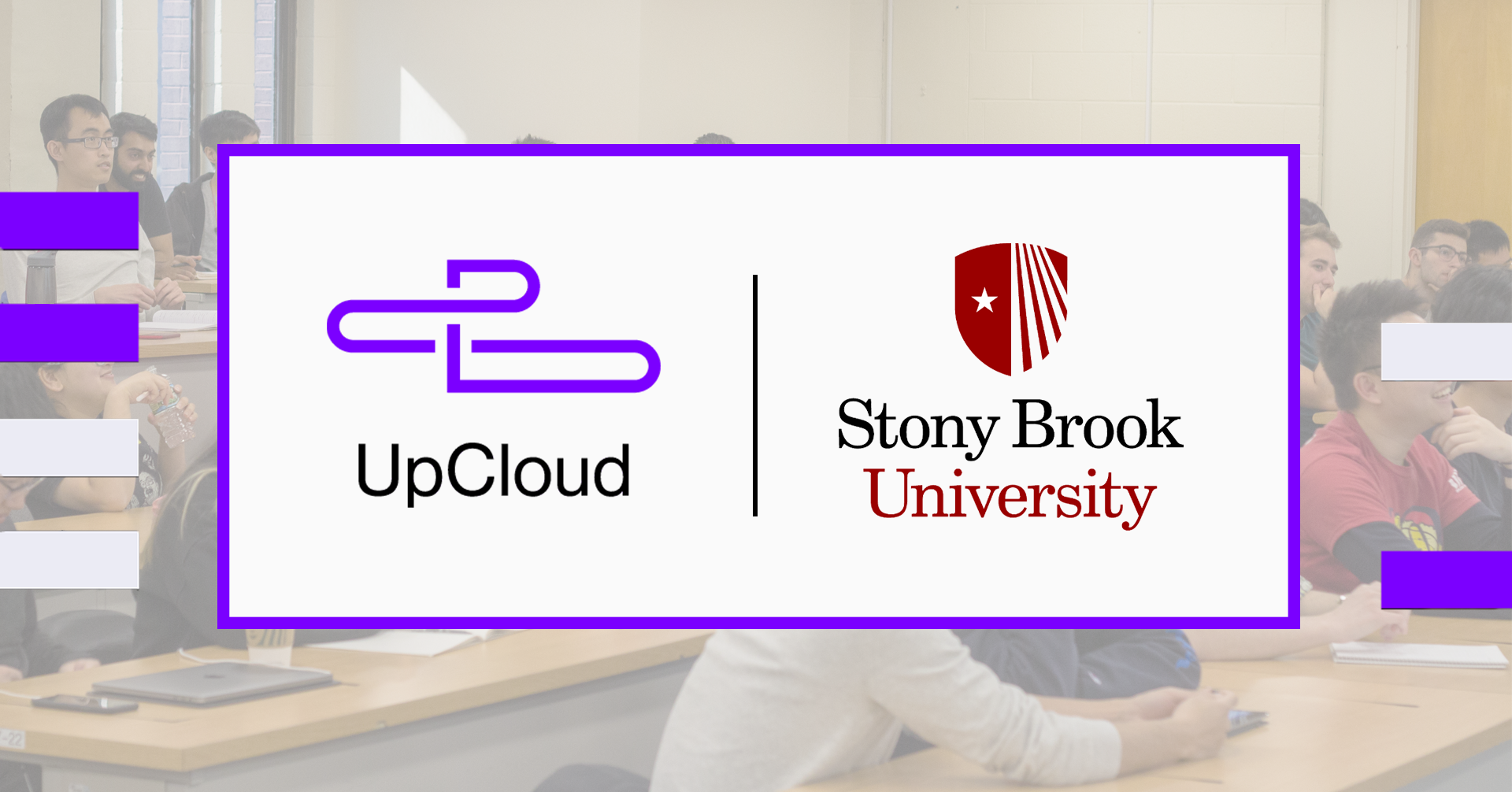 Cloud computing starts with people. Without passionate and qualified developers to set up, maintain and innovate within Cloud infrastructure, the sector would not have experienced rapid global growth over the last decade.

Despite this, educational resources for Cloud computing remain rare or underdeveloped. Only a few institutions offer tailored courses for student developers to pick up the skills and experience needed for a career in cloud, but Stony Brook University is one of them.

“When I started the course, several Cloud providers kindly gave account credits for students to use on projects. UpCloud was the clear favourite.”

Professor Michael Ferdman has been teaching in the Department of Computer Science at Stony Brook University (SBU) for over 10 years. The Department of Computer Science at SBU is the largest producer of undergraduate and doctoral degrees in computer science in New York. Ferdman created the Cloud Computing class seven years ago for undergraduate students studying computer science. The class introduces the principles of cloud computing and how large-scale systems like Facebook and Twitter are built. providing them with a solid foundation for a career in Cloud.

“Computer science education is great at introducing fundamental concepts to students. Before I started the cloud computing class, I was looking around and found only one other university offering a course on cloud computing. Stony Brook’s class takes things further by getting students to deploy in a production-like environment – a real Cloud infrastructure system. In our case, we’re doing this with UpCloud, where every student gets an account that they can log into and access the UpCloud dashboard.

“This means they can launch a virtual machine, or multiple virtual machines in the case of some of the assignments, and perform relatively simple tasks but in the actual environment they would be exposed to if they were working at a business or in a real-life setting.”

UpCloud wasn’t the obvious choice of Cloud provider when Michael started teaching the course. After initially using a small private cloud which he maintained at the university, Michael realised that students would get more from the course by using real Cloud providers.

“When I started the course, several Cloud providers kindly gave account credits for students to use, and I would randomly assign students to groups using the different providers. Over the next semester or two, it became very clear that UpCloud was the favourite compared to alternative options like Linode or Digital Ocean. I’d also given students access to Google Cloud Platform and AWS, but the feedback was that those systems were too overwhelming – students were being bombarded with millions of features.”

“For the past two semesters I’ve relied on sending an email to UpCloud saying, ‘Hey, I’m teaching this course again. Would you guys be willing to donate credit?’ They’ve always been extremely generous and willing to sponsor the entire class.”

Since partnering with UpCloud, Michael has been able to streamline the setup and maintenance of Cloud resources for the class, building infrastructure to automate a significant amount of manual processes with Cloud APIs – taking a huge amount of workload off his teaching assistants and himself.

“The level of support needed from UpCloud has dropped significantly as we’ve figured out how to handle things. In the earlier days, I needed a lot of help, and I still need their assistance when we change the course or semester project. It’s been great to have access to up-close technical support, because we very quickly iron out the issue, sometimes just directly in UpCloud’s interactive chat!”

Antti Vilpponen, UpCloud CEO, is enormously proud of the partnership with the Stony Brook University course: “Organizations are moving at a rapid pace to Cloud services. The challenge is a gap in talent that slows down industries to transform and innovate fast. At UpCloud we foster and empower learning and actively address the gap in skills by collaborating with institutions and offering our easy-to-use and reliable Cloud services.”

In the second half of the semester, students take on a large-scale project that might involve running up to a dozen virtual machines that collaborate with each other. The aim of this project, which has included platforms like microblogging sites and live text editors, is to mimic a real-life business environment and develop the actual skillset required for a job in cloud.

“The students that have developed this hands-on skillset will stand out more to potential employers, because they’ve had formal exposure to a business environment.”

“The critical component of the project is being able to have a high-performance system that can handle a large amount of load and respond quickly, offering good quality of service to users. The goal is really to build up a system that could go viral and have hundreds of thousands of people potentially using and working on it.

“I’ve had a lot of feedback from students after job interviews, before they graduate, saying how the interviewer was surprised that they had any idea about how Cloud infrastructure works, because they don’t expect the typical computer science graduate to have this kind of hands-on experience.”

“Going forward, I think this practical, hands-on skillset is going to become more and more important. The people that have it will stand out more and more in the workforce because they’ve had formal exposure to a business environment. Employers don’t have to worry if these candidates can pick up required skills on the job, because their student projects show that they’re more than capable.”

To find out more about UpCloud’s services, and how you can partner with us on your next big project, get in touch with us here.