How to configure iptables on CentOS 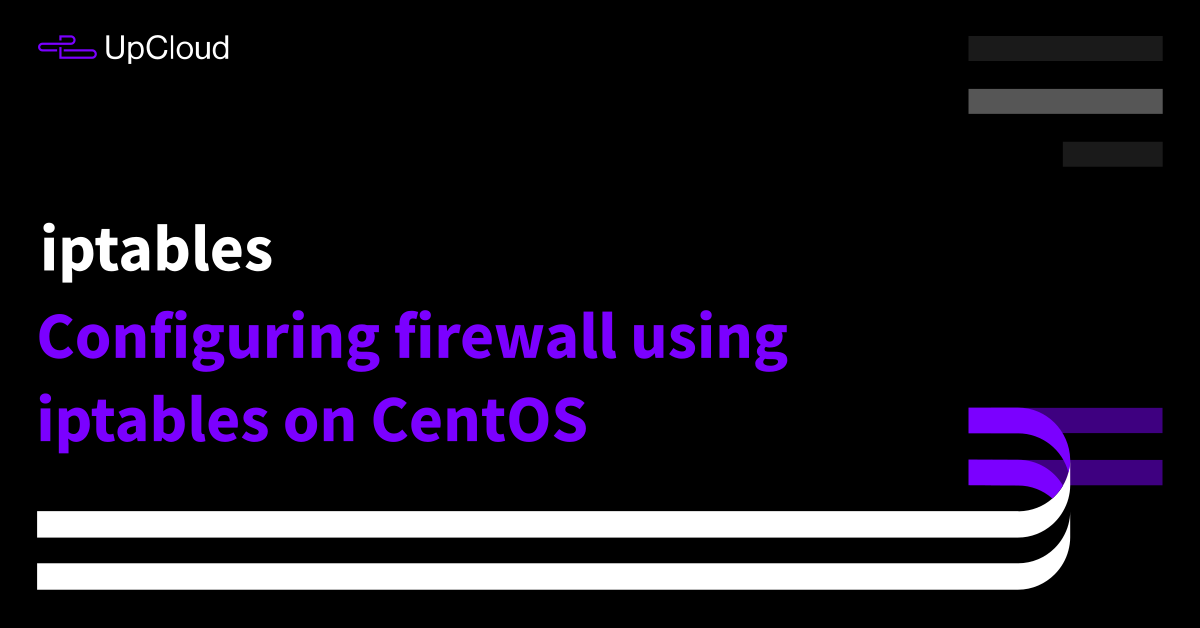 The user-space application program iptables allows configuring the tables provided by the Linux kernel firewall, as well as the chains and rules it stores. The kernel module currently used for iptables only applies to IPv4 traffic, to configure firewall rules for IPv6 connections instead use ip6tables, which respond to the same command structures as iptables. If you are using CentOS 7, you should look into configuring firewalld, which combines the functionality of iptables and ip6tables, though it’s possible to still use iptables just the same.

On CentOS and other Red Hat variants, iptables often comes with some pre-configured rules, check the current iptable rules using the following command.

This will print out a list of three chains, input, forward and output, like the empty rules table example output below.

The chain names indicate which traffic the rules in each list will be applied to, input is for any connections coming to your cloud server, output is any leaving traffic and forward for any pass through. Each chain also has its policy setting which determines how the traffic is handled if it doesn’t match any specific rules, by default it’s set to accept.

Firewalls can commonly be configured in one of two ways, either set the default rule to accept and then block any unwanted traffic with specific rules, or by using the rules to define allowed traffic and blocking everything else. The latter is often the recommended approach, as it allows pre-emptively blocking traffic, rather than having to reactively reject connections that should not be attempting to access your cloud server.

To begin using iptables, you should first add the rules for allowed inbound traffic for the services you require. Iptables can track the state of the connection, so use the command below to allow established connections continue.

You can check that the rule was added using the same sudo iptables -L as before.

Next, allow traffic to a specific port to enable SSH connections with the following.

The ssh in the command translates to the port number 22, which the protocol uses by default. The same command structure can be used to allow traffic to other ports as well. To enable access to an HTTP web server, use the following command.

After adding all the allowed rules you require, change the input policy to drop.

The same policy rules can be defined to other chains as well by entering the chain name and selecting either DROP or ACCEPT.

Now if you were to restart your cloud server all of these iptables configurations would be wiped. To prevent this, save the rules to a file.

You can then simply restore the saved rules by reading the file you saved.

To automate the restore at reboot CentOS offers a system service by the same name, iptables. However, it does not come in the default configuration and needs to be installed manually.

Once installed, start and enable the service.

Afterwards, you can simply save the current rules using the following command.

These are just a few simple commands you can use with iptables, which is capable of much more. Read on to check on some of the other options available for more advanced control over iptable rules.

As per basic firewall behaviour, the rules are read in the order they are listed on each chain, which means you’ll need to put the rules in the correct order. Appending new rules adds them to the end of the list. You can add new rules to a specific position of the list by inserting them using iptables -I <index> -command, where the <index> is the order number you wish to insert the rule. To know which index number to enter, use the following command.

If you wish to remove an existing rule from a certain chain, use the delete command with the parameter -D. The easiest way to select the rule for delete is to use the index numbers explained above. For example to delete the second rule on the input chain, use this command

It’s also possible to flush all rules of a specific chain or even the whole iptables using the -F -parameter. This is useful if you suspect iptables is interfering with your attempted network traffic, or you simply wish to start configuring again from a clean table. Remember to save the rules to a file before flushing the table.

Warning: Make sure you set the default rule to ACCEPT before flushing any chain.

Afterwards, you can go ahead with clearing other rules. Remember to save the rules to a file before flushing the table in case you want to restore the configuration later.

With the iptable flushed, your server could be vulnerable to attacks. Make sure to secure your system with an alternative method while disabling iptables even temporarily.